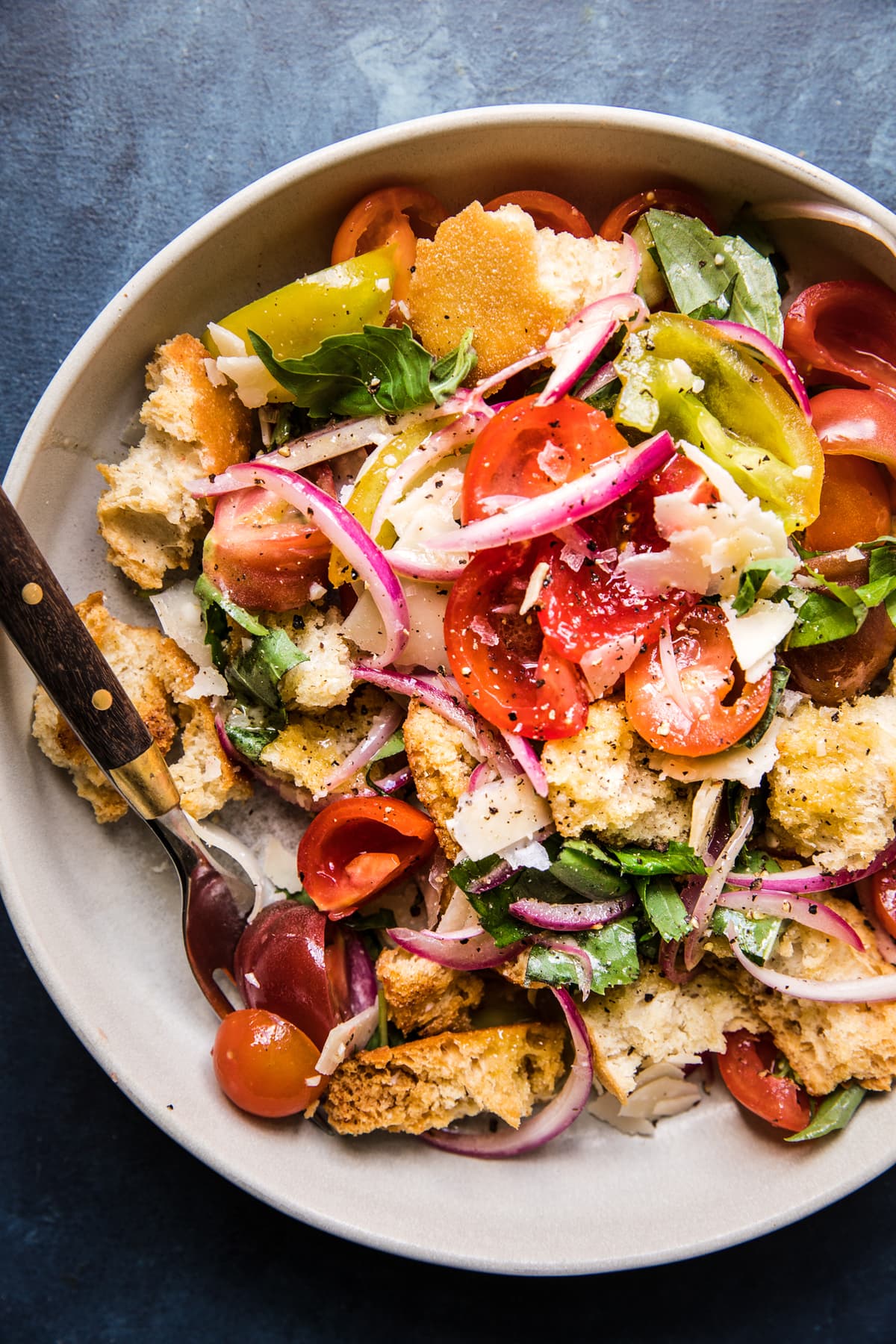 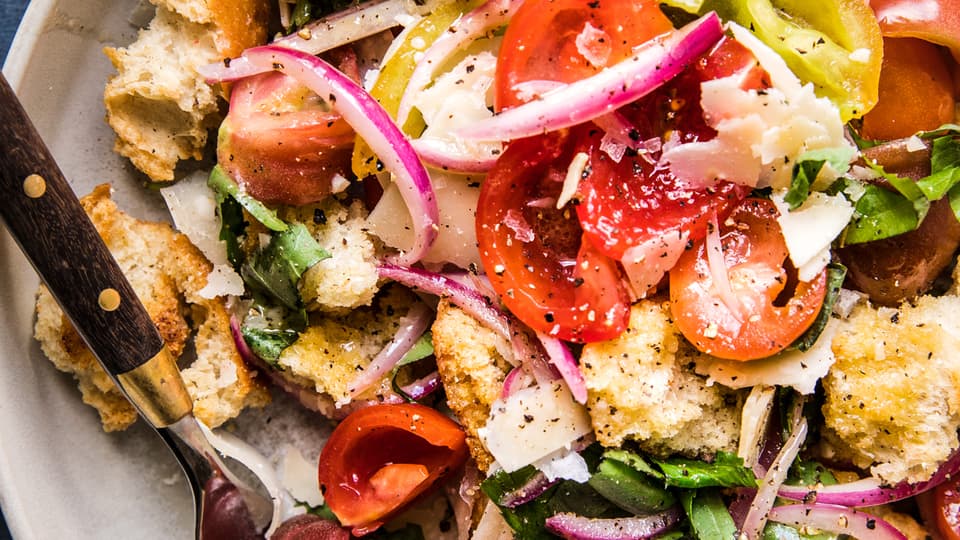 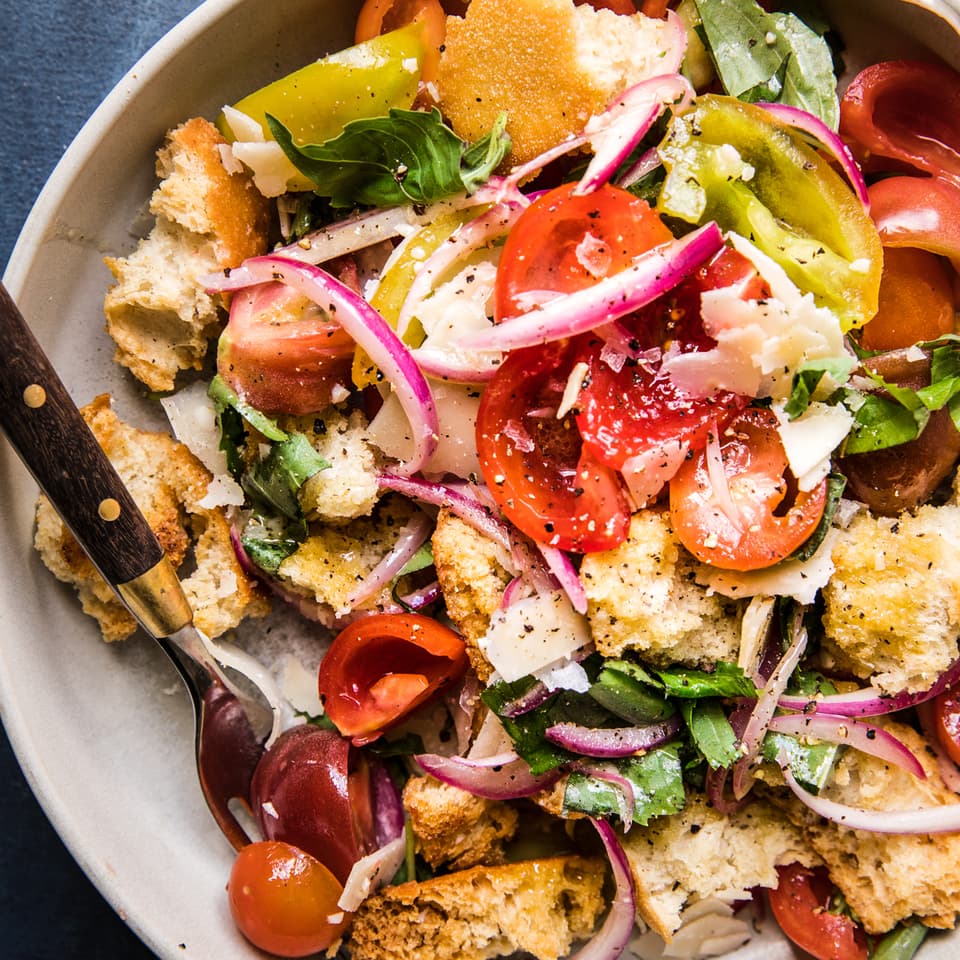 Rustic and soaked with flavor, this tomato panzanella recipe is just the kind of recipe we love to learn by heart. It’s so simple, and it’s so much fun to play around with.

A Classic, Hearty Tomato Panzanella Recipe for All of Your Summertime Feasting Needs

Only the Italians—the brilliant, wonderful, carb-positive Italians—could come up with something as delightful as bread salad. Panzanella is ideal for when the temperatures rise and you want a dinner that involves minimal cooking. As a substantial salad—again, it’s a bread salad! No lettuce to be found here—it’s definitely filling enough to be called dinner, so although you do have to turn the oven on for a few minutes, it’s still a relatively low-effort meal. It’s also one of our favorite things to do with fresh, juicy, peak-season tomatoes! Bread, tomatoes, basil, olive oil, and plenty of Parmesan cheese—what could be better?

What Is Panzanella Salad?

Panzanella is a classic Italian dish that’s closely associated with Tuscany, but can be found throughout Italy in various iterations. Like many great foods of the world, it is a recipe that evolved as a way to use up what people had around—in this case, as a (delicious) way to make the most of day-old (or many days-old) loaves of rustic bread. Tossing it with tomatoes and a garlicky, olive oil-rich vinaigrette dressing gives the bread a second life! As the dried out bread soaks up the dressing and tomato juices and whatever else you might have added to your panzanella, it takes on a new quality—tender, deeply flavorful and pleasantly toothsome.

What Bread Do You Use for Panzanella?

Marcella Hazan—we don’t talk about Italian food without consulting her first—simply calls for “good bread” in her panzanella recipe. But honestly, that’s not very helpful, is it? Traditional Tuscan panzanella would be made with local, country loaves—probably of various shapes and sizes depending on the town or village—and most of us don’t have access to exactly that type of bread. What that means, to us, is that you’ve got a little leeway in terms of which bread you’d like to use for making your panzanella! Traditionally, also, the bread would be stale (as we’ve mentioned). At least a day old, maybe more. But, our panzanella recipe mimics that staleness by toasting the bread, so even if your bread isn’t “mature”, don’t sweat it. So, while you can use most any bread that you love, here are three types of bread that we love to use to make panzanella:

How To Make Panzanella

This easy, classic panzanella salad recipe comes together pretty quickly and relies on simple ingredients to make a dreamy light (vegetarian!) dinner, or hearty side.

What to Serve With Panzanella

On a hot summer evening, all you really need to serve with panzanella is a nice, chilled glass of good white wine. But, if you’d like to serve this as part of a larger meal, it can make a really lovely side dish, or complement to other veggie-heavy, warm-weather dishes. Try serving it with:

This Garlicky Tomato Bread Salad is Our Kind of Dinner Salad

Rustic and soaked with flavor, this panzanella recipe is just the kind of recipe we love to learn by heart. It’s so simple, and it’s so much fun to play around with. Make it, and make your own! Maybe you’d like a little more garlic, or to add some anchovies or oil-packed tuna to the mix—uh, YUM! When you try our panzanella recipe, let us know how you like it! Share a photo and tag us on Instagram using @themodernproper and #themodernproper so that we can see your stuff! Happy eating!