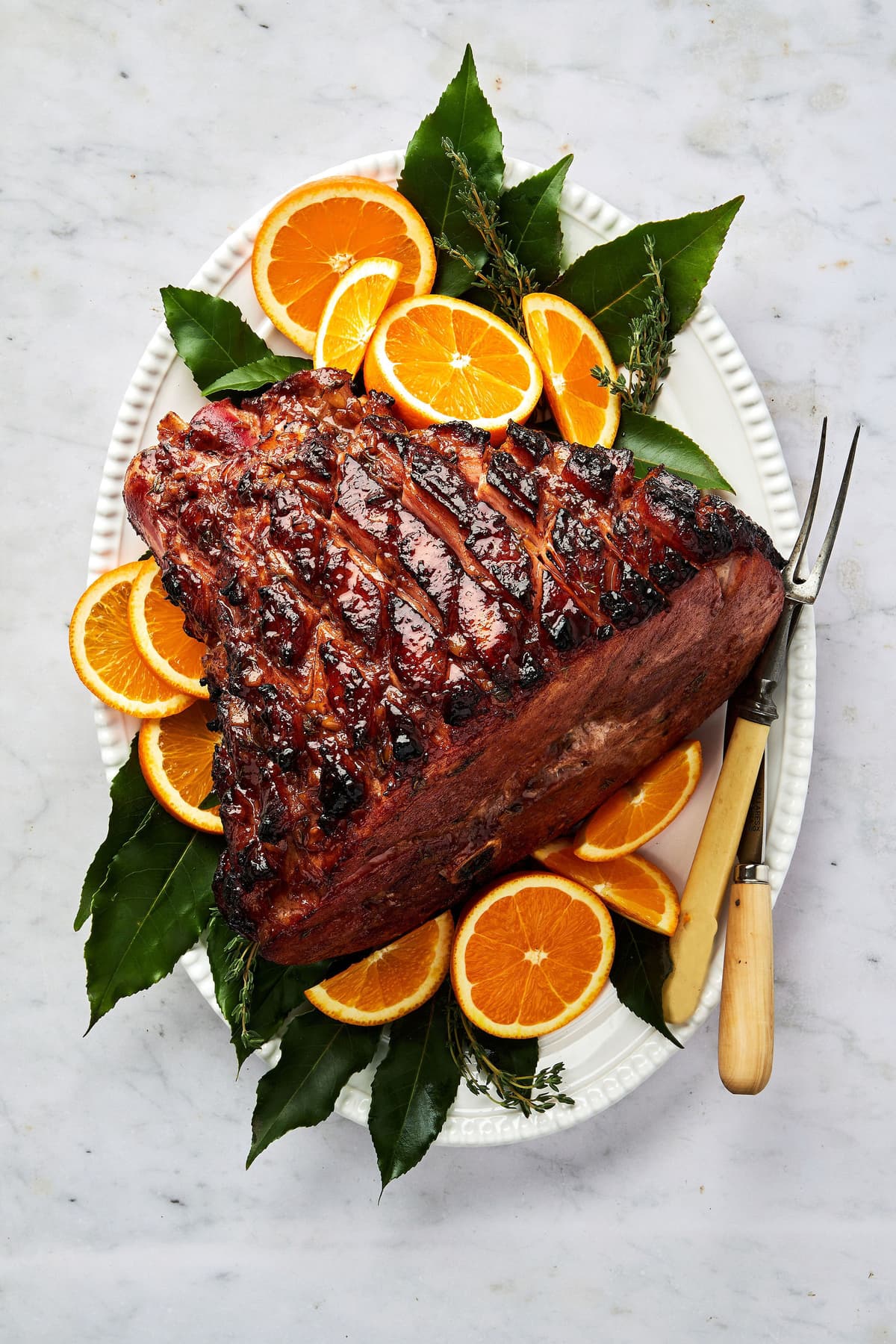 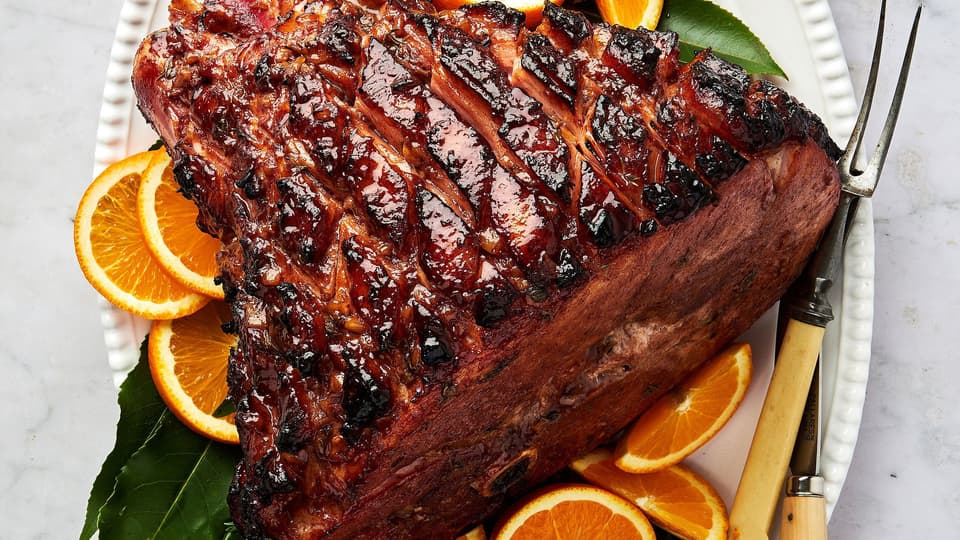 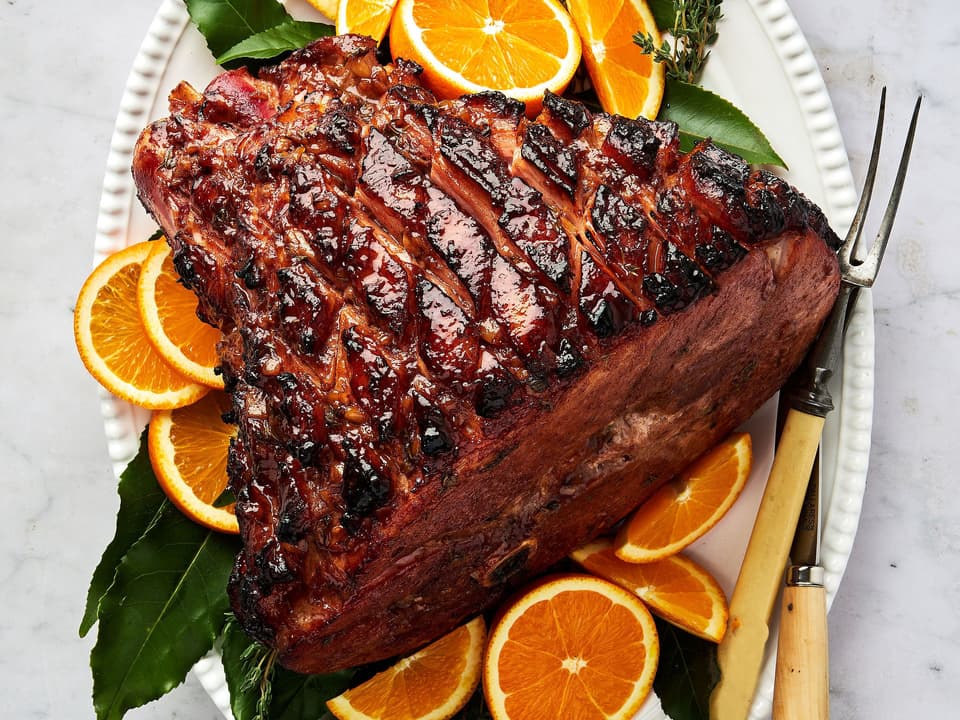 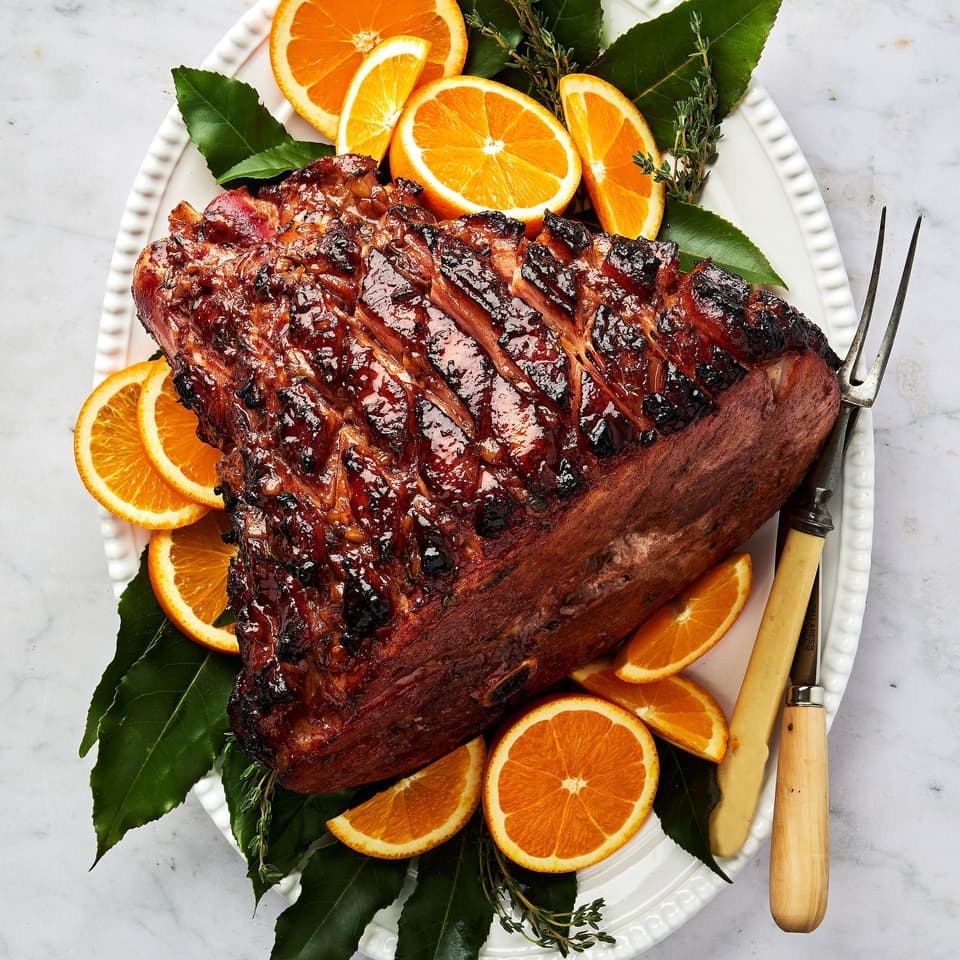 Whether you’re celebrating a holiday or just gathering the family, our honey baked ham recipe with an herby honey glaze is sure to please.

A Homemade Honey Baked Ham That’s Even Better Than the OG!

A great big holiday ham in the middle of your table always feels like a real celebration. Covered in a delightfully sticky glaze, it’s familiar and comforting and generous and—best of all—makes for fantastic leftovers. We love a turkey sandwich, but that day-after-Easter leftover ham sandwich—with extra mustard, please—is possibly even better. Plus! With our homemade (yes, copycat!) honey baked ham recipe you can recreate the brand-name honey baked ham that you love so much for a lot less money and without much more effort. You really can! Holiday ham isn’t hard or time consuming, and it doesn’t have to be break-the-bank expensive. With a homemade honey-sweetened, herb-and-orange glaze, this ham recipe is sure to be your new go-to family holiday gathering superstar.

We love that crispy, slightly sugar-crunchy Honey Baked Ham glaze as much as anyone, and it definitely inspired our holiday ham glaze. But we also added a little excitement to the mix! Nothing too crazy, but a little dose of fresh herbs makes everything nicer and who could say no to roasted garlic! It ups the sweetness a bit—roasted garlic takes on a lovely rich, caramelized flavor—but it’s also deeply savory. You can roast your own, but for the sake of ease we usually prefer to just grab it from the grocery store olive bar.

We have a theory that half the reason people love Honey Baked Ham so much is that buying one already cooked and glazed isn’t just easier—which it is—but it takes all the guesswork out of making a ham. You don’t have to wade through the—admittedly a little confusing—process of shopping for a ham. There are a lot of different terms and phrases that get tossed around, and it can be a little confusing if it’s your first time making a ham. For our garlic-and-honey baked ham recipe, the easiest thing to look for is a bone-in, smoked, spiral cut ham and yes, it will already be fully cooked when you buy it. If you don’t want to do a pre-cut ham, you can get a whole ham from the butcher! Just ask them to remove the rind and score the fat for you, so that you don’t have to mess around with that at home. Just so that you really feel confident when you head to the store, here are some of the words you might see on various ham labels and what they mean:

How Do You Make Honey Baked Ham?

It’s so easy to cook a honey baked ham at home. Honestly, the shopping is the hardest part, and even that isn’t too hard once you know what you’re looking for. Once you’ve got your recipe picked out and a ham in your hands, it’s time to get cooking! Here’s how to make the best (copycat) honey baked ham ever in just 3 simple steps:

How Much Ham Do I Need?

This is a great question, and always comes up around the holidays or, as we call them, ham season. The general rule is about 1/2 pound of ham per person, but we like to be generous at the holidays and we like to have leftovers—for ourselves and to send home with friends and relatives—so we usually go big! This recipe calls for an 8-10 pound ham, and so you can safely plan that it’ll serve 12 people with enough for seconds, thirds and leftovers.

Side Dishes Worthy of a Ham-Tastic Holiday Feast

If you can’t ham it up at the holidays, when can you?! Go big with this gorgeous honey baked ham copycat recipe, and we promise everyone will be raving for years to come. We want to hear all about how your holiday feast turns out! Share a photo and tag us on Instagram using @themodernproper and #themodernproper so that we can see your stuff! Happy eating!

NOTE: You can use a spiral cut ham—meaning the ham is fully cooked and sliced and ready to go. Or, if you buy a whole smoked ham from the butcher—which is still fully cooked, but not yet sliced—simply ask them to remove the rind and score the fatty layer for you.

Need to change up some ingredients? Unsure about a step in the method? Click the Ask a Question button above. We’re here for you.