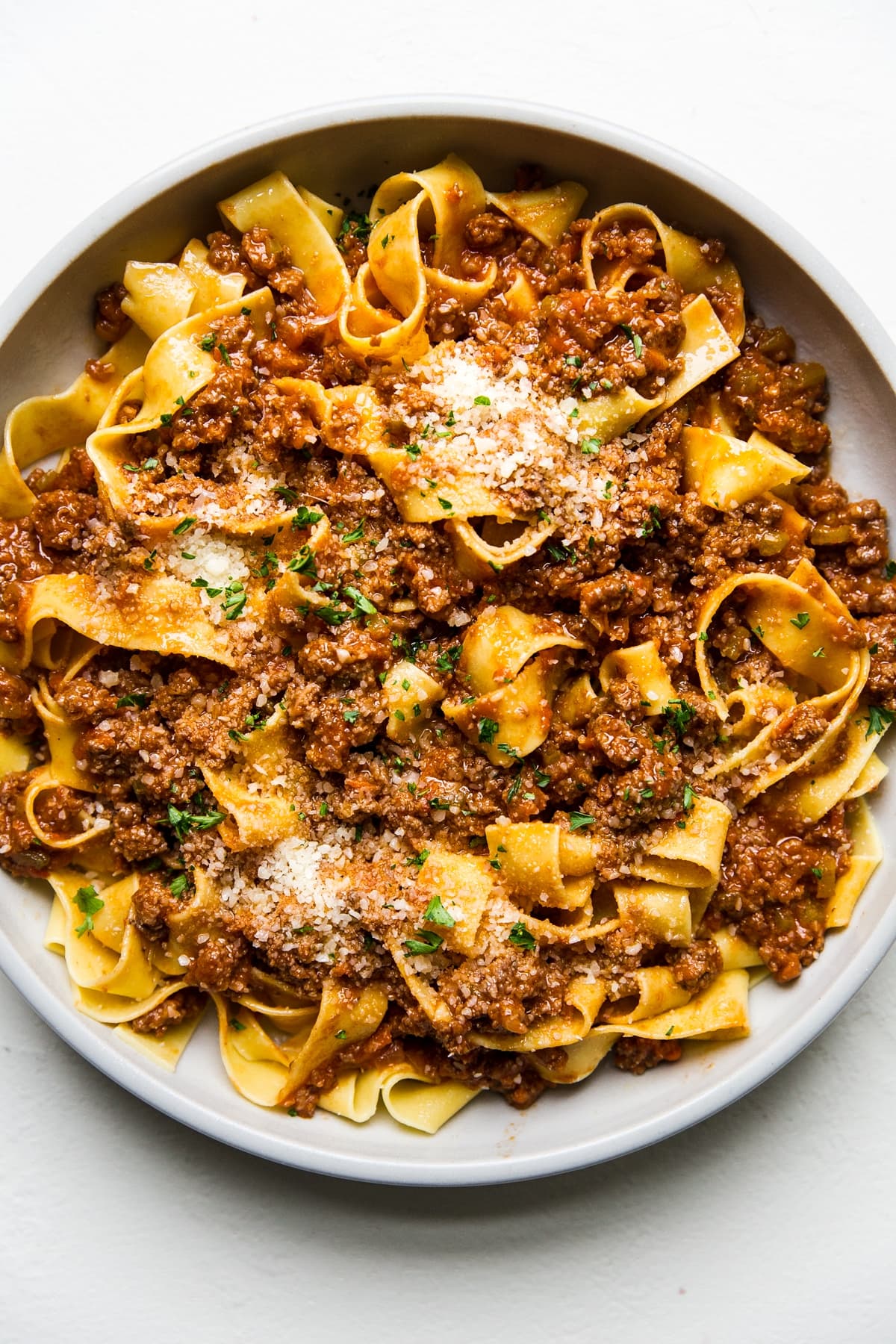 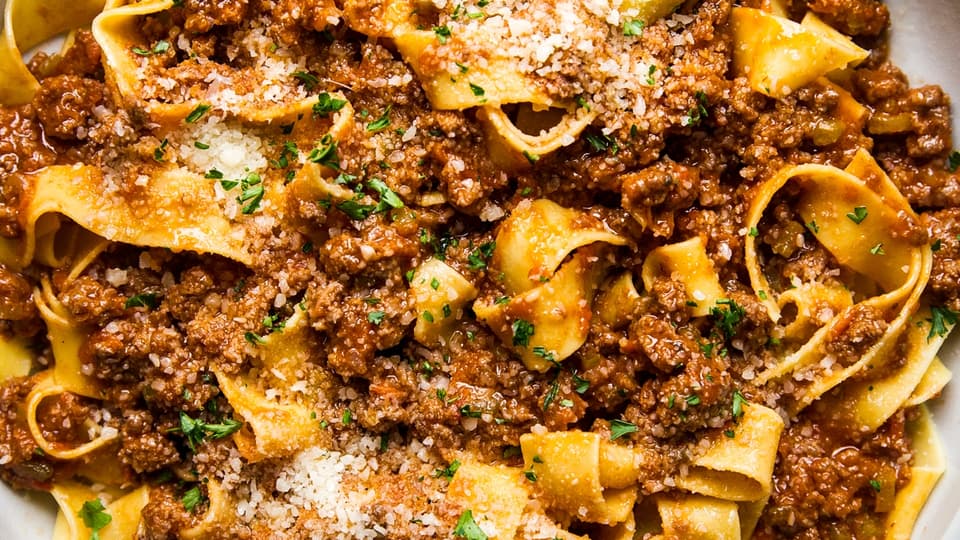 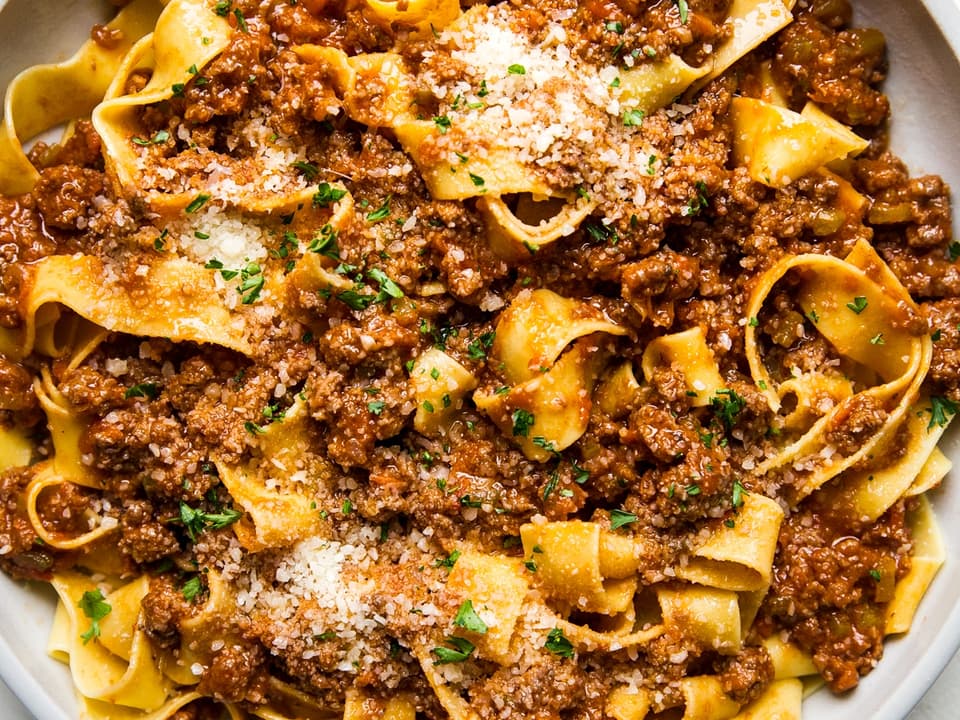 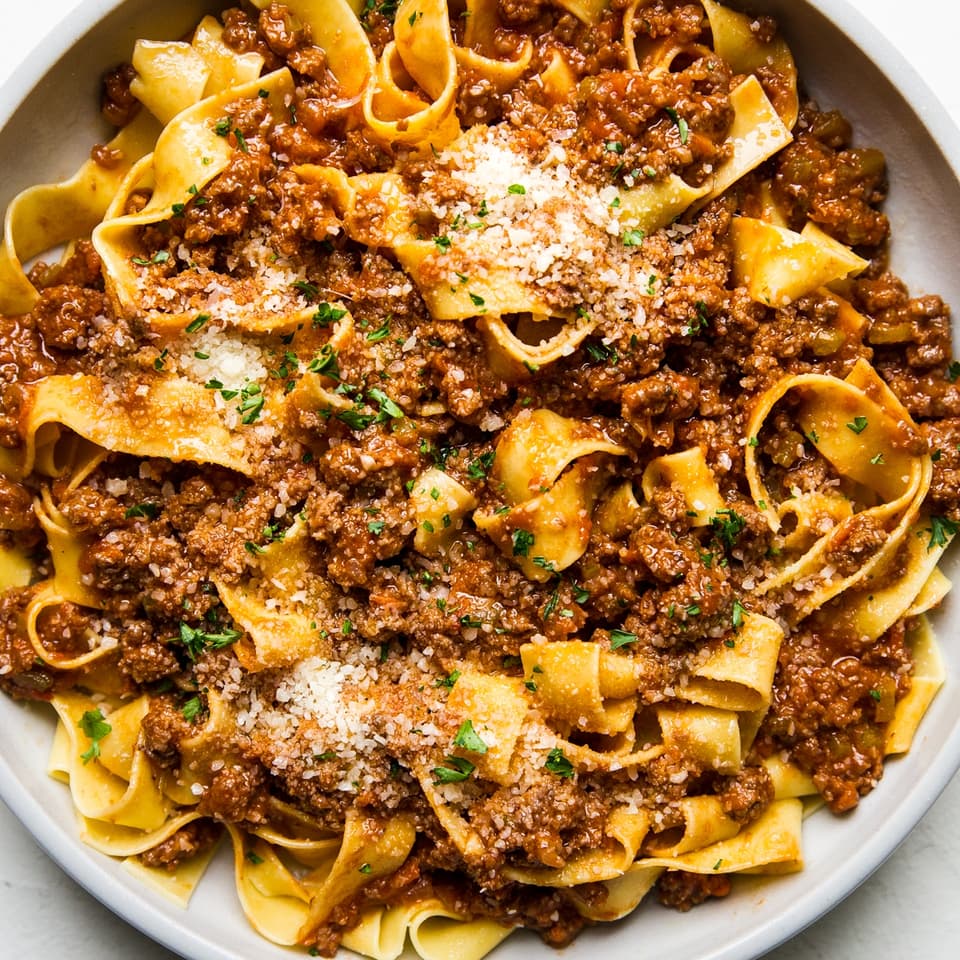 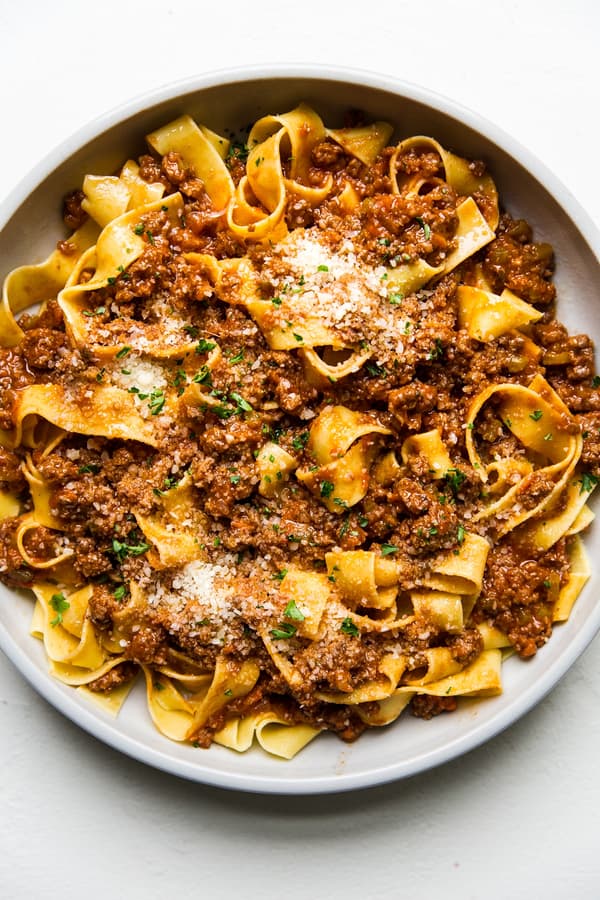 Hearty and comforting, this meaty, easy bolognese sauce recipe takes less time to make than it does to disappear into hungry tummies.

A Meaty Bolognese Sauce Made for Busy Weeknights.

We love day of long, slow cooking as much as the next person, but (sadly) every day cannot be Sunday. Classic Bolognese sauce recipes call for lengthy simmer times—we’ve read recipes that call for up to six hours of cooking—but our Bolognese recipe is all about speed. This easy Bolognese sauce comes together in just 30 minutes, because we’ve got to get dinner on the table on Tuesday nights, too. This is a stick-to-your-ribs sauce—hearty and filling, it’s a one-bowl supper that everyone will love.

You hear the word “Bolognese” and you probably think of a tomato-y, meaty pasta sauce, right? And that’s spot on! The word “Bolognese” just means “in the style of Bologna”, and refers to a meaty pasta sauce that originated in the Italian city of Bologna, which is the capital of Emilia-Romagna. When we shared our recipe for Instant Pot Ragu, we dove into this question of decoding the wild world of classic Italian pasta sauces, and what the heck the difference is between Bolognese, sugo and ragu. The main takeaway is that “ragu” is a broad term that means a meat-based sauce typically served over pasta, and “Bolognese” is a more specific term, meaning a type of ragu that is identified with the city of Bologna. Are you confused yet?

Actually, confusion is good! It means you’re on the right track. Beyond the general agreement that Bolognese is a tomato-y meat sauce, there isn’t a lot of agreement about exactly what a true Bolognese must be made of. Many recipes, like Marcella Hazan’s famously beloved Bolognese (and our recipe, too!), call for the inclusion of dairy—like milk or cream. Others insist on adding wine, though there is still argument about whether that wine should be red or white. We’ve opted to keep things as simple as possible. Is this Bolognese authentic? Since it’s hard to say what exactly an “authentic Bolognese” would even be, we can at least assert that our recipe is no more or less authentic than one elses! And, we can say with 100% authority that our easy Bolognese recipe is just as delicious as the best of the rest.

Like the Barefoot Contessa herself constantly quips, store-bought is fine. Like, for example, on a busy weeknight, when using a store-bought marinara sauce takes your Bolognese cook time from three hours to thirty minutes. That’s our kind of recipe hack, and we’re betting it’s yours, too. Our Bolognese ingredients list is super straightforward—here’s what you’ll need:

Why Our Easy Bolognese Recipe Works

How can you possibly make a delicious Bolognese in just 30 minutes? The key is to build big flavors out of a few super-powerful ingredients. Here are four reasons why this recipe works so well:

How to Make Bolognese Sauce

Six simple steps, and one of them is “eat!”. Weeknight Bolognese, here we come!

What else do you need?

We hope you love this quick and easy Bolognese sauce recipe as much as we do. If you make it, let us know how it went over in your home! Snap a photo of your big bowl of pasta, and maybe even a video of the beautiful people you share it with. Tag us on Instagram using @themodernproperand #themodernproper. Happy eating!