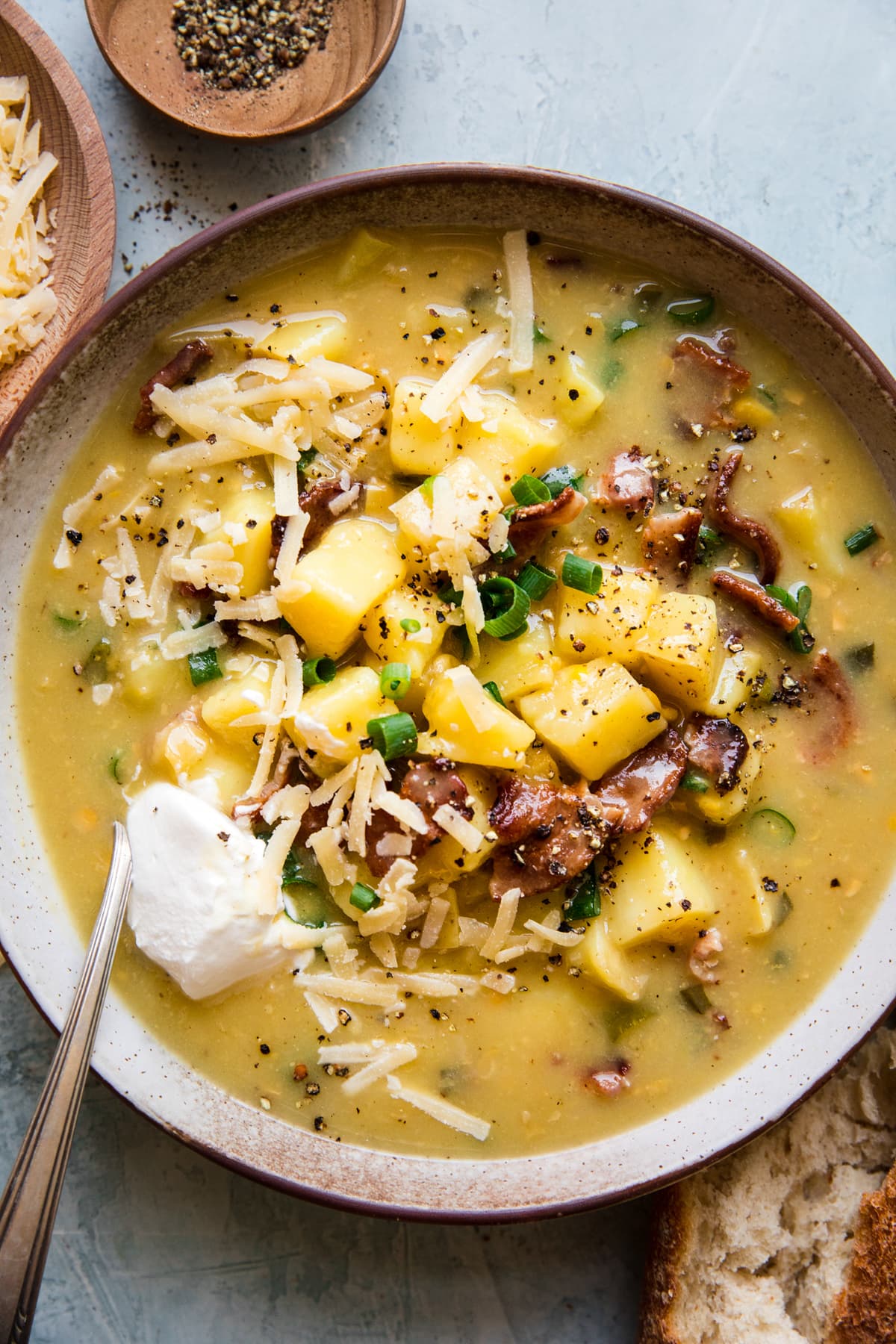 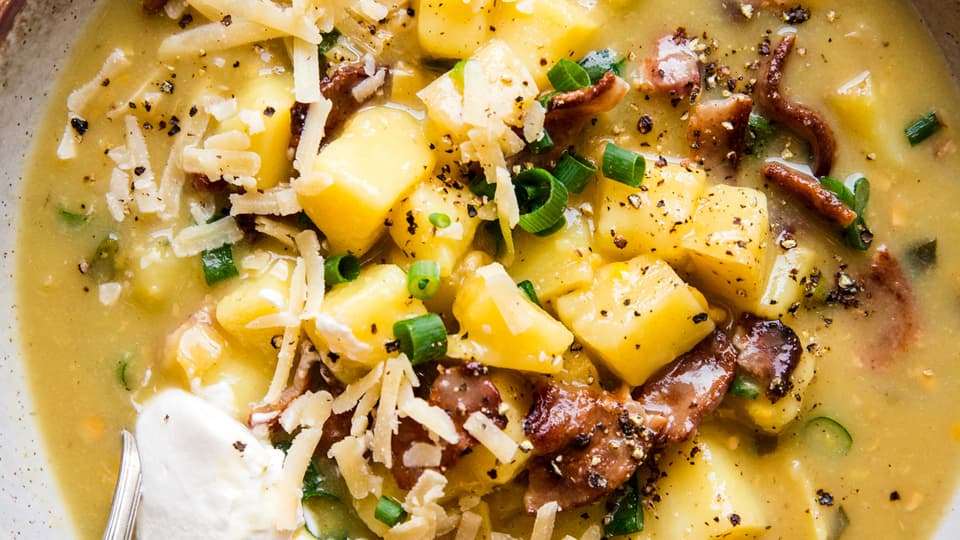 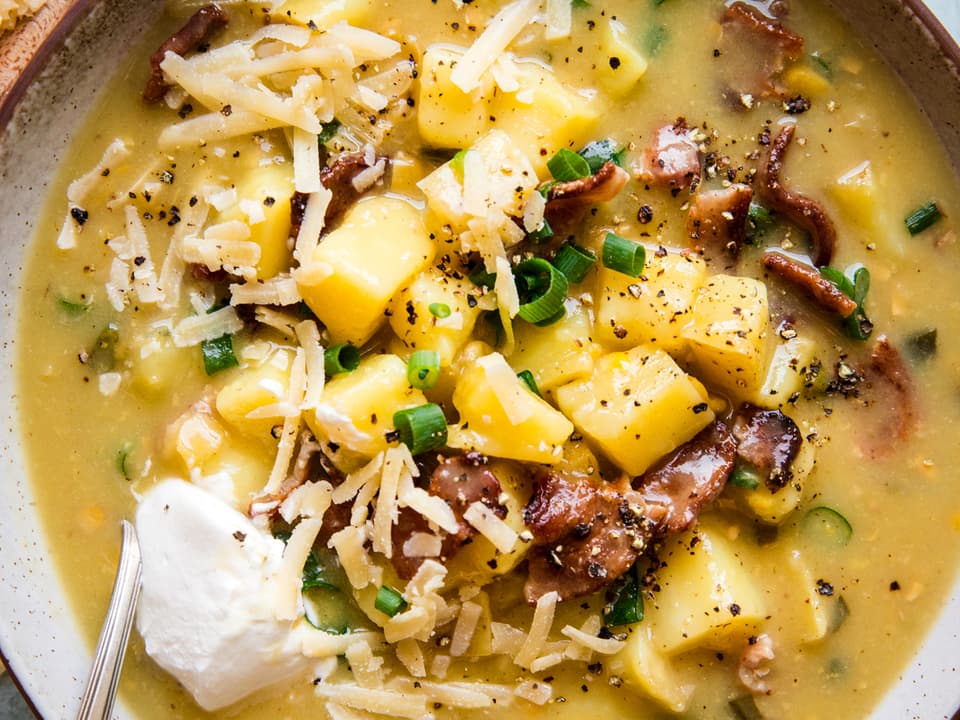 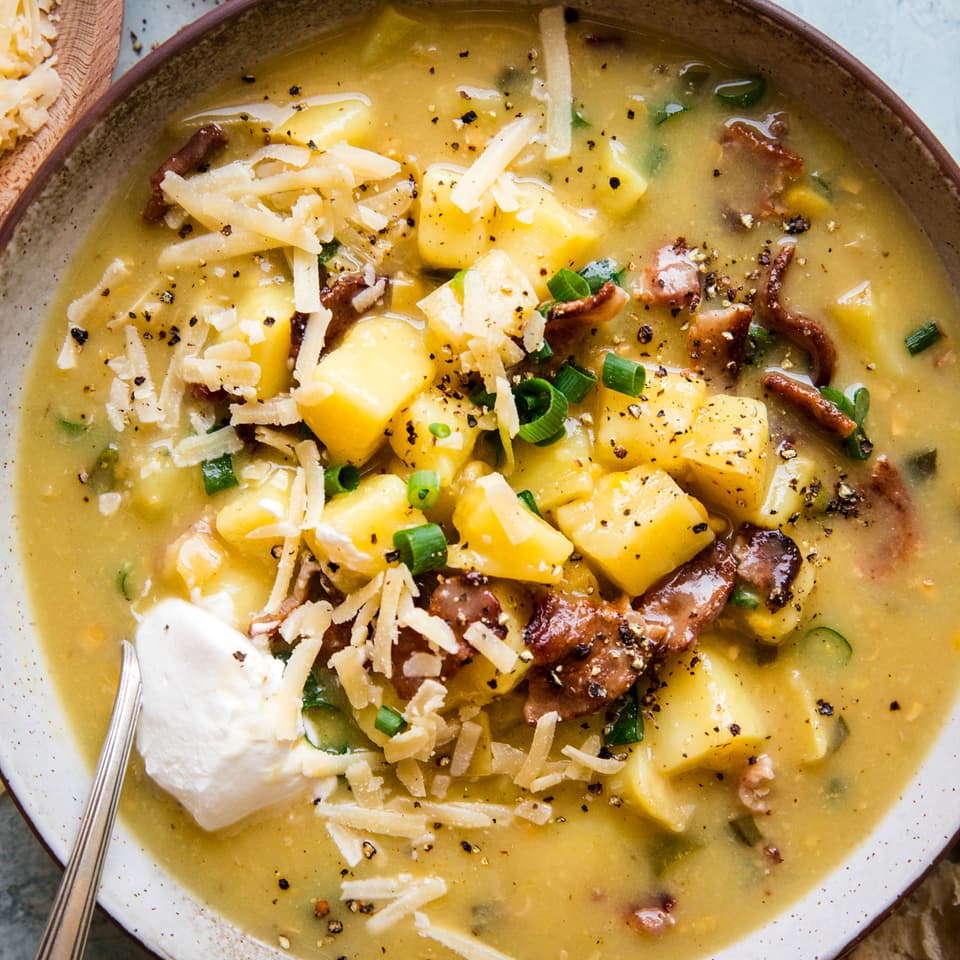 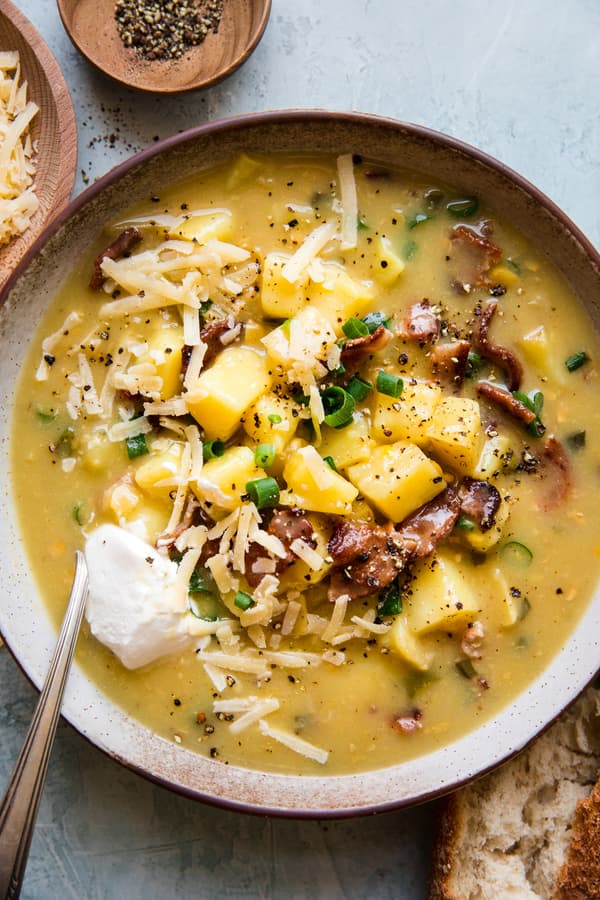 Another addition to our collection of 5-ingredient recipes, this incredibly easy, creamy corn chowder recipe gets its wonderful richness and depth from the powerhouse that is bacon fat!

The Fastest, Easiest Corn Chowder, Ever.

There’s a time and a place for 100% scratch-made pots of soup that simmer all day and into the night and have a list of ingredients that’s miles long. However, that time and place is decidedly NOT a busy weeknight and despite the lack of time available to us on busy weeknights it turns out that we’re still expected to get dinner on the table. On those kinds of nights, we need speed. But we still want delicious! Thankfully, recipes like this exist. Five ingredients, 20 minutes. Fry some bacon, open some cans. Boil some potatoes. A quick purée and ta da! Creamy, rich potato and corn chowder ready to fill some hungry tummies.

Everything You’ll Need To Make This Easy Corn Chowder Recipe.

Smoky and rich, bacon fat is the key to every great chowder recipe and our speedy, full-of-shortcuts corn chowder recipe is greater than the sum of its parts thanks to the inclusion of bacon fat. It doesn’t just add flavor—though it adds that in droves. Rendered bacon fat also adds a unique richness and heft that nothing else can bring and contributes to the creaminess of the finished chowder. This is a really long-winded way to say don’t skip it! The bacon is essential. When there are only 5 ingredients, don’t try for any swaps. Here’s what you’ll need to make this super easy potato and corn chowder:

You Know You Love It, But What Exactly Is “Chowder” Anyway?

As with so many of these old culinary words, “chowder” is a little hard to define. You know it when you see it, right? New England clam chowder is probably the first thing that comes to mind when we say chowder—thick, creamy and loaded with potatoes and clams. Then there’s Manhattan clam chowder, which is brothy and tomato-based and really throws a wrench in the search for a particular type of soup that’s allowed to be called “chowder”. So, what can we say for sure about chowder? Well, chowders are always soups. They often have seafood, but not always. They often are rich and creamy, but not always. The word “chowder” might be a derivative of chaudière, the French word for ‘cauldron’, so chowders are cooked in a cauldron (or stock pot, which honestly doesn’t really narrow things down much at all.) And there you have it. Chowder! What can we say? You’ll know it when you see it.

How To Make Our Easy Corn Chowder Recipe

Five ingredients and really just about three simple steps, this ultra easy soup recipe relies shamelessly on canned creamed corn and good old starchy potatoes for its richness and creaminess. It’ll be ready in no time and it requires absolutely no special skills. Promise!

Can I Freeze It?

You sure can! Corn chowder can definitely be frozen. It’ll keep for up to three months in the freezer. The bacon won’t hold up perfectly in the freezer, so you could wait to add the bacon pieces at the end until you’re ready to defrost and reheat the chowder. Or, you can just accept that the bacon will get a little chewy in the freezer—the flavors will still be wonderful.

A hearty, cozy, comforting supper is just a few minutes and a few ingredients away—what’s more soothing than knowing that? Not a thing, in our opinion! When you try this easy corn chowder, we’d love to know how you like it! Share a photo and tag us on Instagram using @themodernproper and #themodernproper so that we can see your stuff! Happy eating!